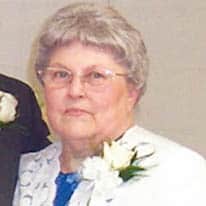 Hallie Loraine Harry Terry, 82, of Meadows of Dan and formerly of Floyd, Virginia passed away Wednesday, April 13, 2022. She was born in Giles County, Va, on June 22, 1939. Loraine was a member of New Bell Spur Primitive Baptist Church. She was a loving mother, grandmother and great-grandmother.

Funeral services for Loraine will be held Friday at 11 a.m., at New Bell Spur Primitive Baptist Church with Elders Carl Terry, and Mark Terry. Burial will follow in the church cemetery. The family will receive friends Thursday April 14, 2022 evening from 4 – 7 p.m. at Maberry Funeral Home in Floyd, Va.

In Lieu of Flowers, donations will be accepted or memorials may be made to the New Bell Spur Primitive Baptist Church c/o Tony R. Horton, 1429 Howlett Street, Hillsville, Virginia, 24343.

Maberry Funeral Home in Floyd is in charge of arrangements.