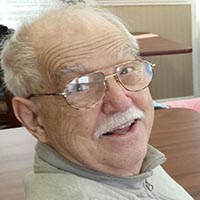 Robert William Terhune, 88, of Blacksburg, Va., died at midnight on November 20, 2014, at Lewis-Gale Montgomery Hospital. He was preceded in death by his wife of 66 years, Gloria; his father, John Terhune; stepmother, Camilla; his mother, Ann and stepfather, George McFetridge.

Born in Detroit in 1926, Bob was a bright and precocious boy. At age 17, he enlisted in the Navy during World War II and qualified for advanced training in electronics and radar. He saw limited action in the Pacific on the destroyer U.S.S. Rowe. In 1946, while training in Boston, he met the love of his life, Gloria Zerella, and they were married in December 1946. They moved to Dartmouth College for further training. 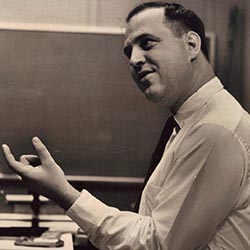 The family moved to the Michigan, where Bob studied optical physics at the University of Michigan, working with colleagues there and from other universities in developing the maser (precursor to the laser). He received his Ph.D. in 1957, and continued basic and applied research at the Ford Research Laboratory in Dearborn, where he stayed until retirement in 1988.

In 1967, he was recipient of the University of Michigan Sesquicentennial Award given to the top 150 graduates in U of M’s 150-year history. And in 1992, he was awarded the Fredrick Ives Medal, the highest award of the Optical Society of America, in “recognition of his many pioneering contributions to the field of nonlinear optics as well as his service to the optics community.”

Bob was founding editor of both the OSA Optics Letters journal (1977) and the Journal of the OSA B: Optical Physics (1984). In 1988, Bob took a position at the Jet Propulsion Lab in Pasadena, Calif., where he and Gloria lived until 1996 when they moved to Blacksburg to be near daughter, Sandra, and her family.

Many thanks to the staff at Wheatland Hills, Christiansburg, and especially to Bob’s caregiver and companion, Jeff Foster. In lieu of flowers, please send a donation to the Optical Society of America Foundation to provide student scholarships in Bob’s name.