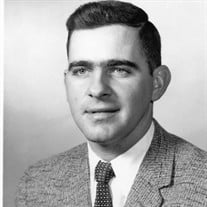 William F. (Billy Ford) Teel, age 89, of Christiansburg, passed away Thursday, October 7, 2021 from heart disease at Montgomery Regional Hospital. He was born on April 13, 1932 in Montgomery County to the late Sidney Clyde and Lela Mae Teel.

He is survived by his only daughter, Camille Teel; sister, Ruby Gibson of Martinsville; and seven nephews and eight nieces.

Billy was a member of the Christiansburg Church of Christ and spent most of his younger years in Copper Valley and Riner. He graduated from Auburn High School in 1950 and from Virginia Tech in 1958 with a dairy science degree. He was drafted in the Army in 1953-1954 and served most of his term in Germany. He was a lifelong farmer but was also employed as a dairy inspector at the Wytheville lab until retirement.

Visitation will be held outside at the back of Horne Funeral Home on Tuesday, October 12, 2021, from 12-2 p.m. with the Funeral Service to begin at 2 p.m., with Ministers Rick McCurdy and Dennis Curd officiating. Interment will follow in Sunset Cemetery, Christiansburg.

The family requests visitors to the services wear a mask and practice social distancing.