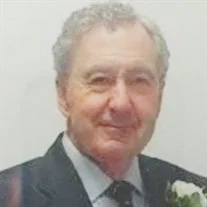 Donald Otis Teel (Don), 92, of Christiansburg, VA, passed away peacefully at home on Tuesday, September 6, 2022 after a short illness.
Don was born on June 23, 1930 to the late Shelor and Essie (Altizer) Teel of Riner, Virginia.

He has spent his entire life in Montgomery County, during which he owned and operated Teel Chevrolet Corp. (25 years), drilled oil wells in Kentucky, drove a tractor trailer, delivered milk, and built patios. Don has been a lifelong member of the Church of Christ serving as song leader and treasurer for 32 years. Don also proudly served in the United States Army during the Korean conflict.

Don is survived by his wife of eight years Cathy Wheeling Teel; two daughters, Marisa Teel of Chicago, IL, and Donna Kay Hudson(Jay) of Nashville, TN. He is also survived by two grandchildren, Kelsey and Daniel, both of Nashville; three step-children, Angela M. Taylor of St. Marys, GA, Nick E. Proffitt of Williamsburg, VA and William R. Proffitt of Narrows, VA; one great-grandson, Levi, of Nashville. Also surviving are seven step-grandchildren; a sister, Peggy Sheppard (Roger); and many nieces and nephews as well as many longtime friends.

Don was preceded in death by his first wife of 60 years, Betty (Thomspon) Teel in 2012; four brothers; Ward, Shelor, Willard, and Wendell; and three sisters; Edith, Irene and Dorothy; and one step-granddaughter, Kaitlyn Rae Taylor.

A special thank you to Intrepid Hospice Care and Mylinda Smith for their excellent care.

The family will receive friends on Monday, September 12, 2022, from 10 am to 11 am at Horne Funeral Home in Christiansburg, VA with service following at 11 am. Burial at Sunset Cemetery following the service.