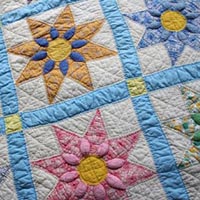 Bessie Mae Higginbotham Teats, 69, of Narrows, went home to be with the Lord on Friday, November 9, 2012 at Riverview Nursing and Rehabilitation in Rich Creek. She was born in Norfolk, Virginia on February 7, 1943 and was the daughter of Mahala Baker Higginbotham and the late Marshall Chapman Higginbotham.

In addition to her father, she was preceded in death by a daughter, Dana Teats Waldron; and a brother, Marshall Higginbotham.

A former nurse’s aid for Giles Memorial Hospital in Pearisburg, Bessie was a gifted quilter, making many baby quilts. She was a faithful member of Faith Temple Pentecostal Holiness Church in Pearisburg. A loving wife, mother, grandmother, sister and friend, she will be dearly missed by all who knew her.

The family requests that those sending memorial contributions, please consider either East Chapel Community Church or the First Church of God in Rich Creek.