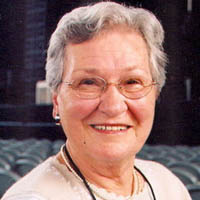 Ora Flanagan Taylor, 86, of Shawsville, passed away on Thursday, August 13, 2015, surrounded by the love and support of her vast family and friends. Born July 16, 1929, she was the youngest daughter of Samuel Morrill Flanagan and Ora Lean Tugwell.

She was preceded in death by her brother, James Leland Flanagan, sister, Aileen Flanagan Jefferson, and her brother-in-law, Thomas Graham Jefferson.

Clarence Waldo Taylor Jr.’s life was changed forever when he married Ora on June 20th, 1947 in Farmville N.C. Ora graduated from The Medical College of Virginia School of Nursing in 1949 and taught nursing while Clarence completed med school. Ora and Clarence made Shawsville their home on July 4, 1957. While she loved nursing, her true calling was raising her family, first born, Michael David Taylor, September 8, 1956, then Clarence Flanagan ‘Butch’ Taylor on April 13, 1961, only daughter Leigh Anne Taylor, May 21, 1962 and finally, John Andrew Taylor on March 29, 1967.

Memorial visitation will be at Horne Funeral Home in Christiansburg, Sunday, August 16, 2015, from 6 to 8 p.m. Funeral services will be at White Memorial Methodist Church in Shawsville, Monday, August 17, 2015 at 10 a.m. Interment will be at Knollkreg Memorial Park in Abingdon At 3 p.m. In lieu of flowers, gifts can be made to the School of Nursing at the Medical College of Nursing (VCU) in the name of Ora Lee F. Taylor and Clarence W. Taylor Jr. MD Endowment Fund.