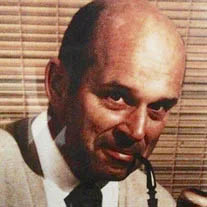 Tommy was a life long resident of Blacksburg. He served in the 20th US Army Air Corps in WWII as a gunner on a B 29, flying 21 missions over Tokyo, Japan. He was the recipient of the Bronze Star. He graduated from Virginia Tech after the war in Business Administration, and was co-owner/manager of Hardie’s Esso. Tommy left the Esso station to act as Asst. Director of the Cooperative Education program at Va Tech.

Upon his retirement, Tommy began working at Heaveners Hardware, where he worked until he was two weeks shy of his 91st birthday. Until the day he died he regretted not being able to continue working.

Tommy was a member of the Blacksburg United Methodist Church, one of the founding members of the Blacksburg First Aid Squad, and served on the Blacksburg Volunteer Fire Department. He had a kind and cheerful spirit, loved his family, friends and dogs dearly . He never met a stranger, and was known to feed the stray cats behind Heaveners in the mornings before work. He enjoyed his gin and tonics, cigars, telling good jokes, and cutting a mean rug with his bride to Big Band Music. He is dearly loved, and will be greatly missed

There will be a graveside service at Westview Cemetary in Blacksburg on Tuesday , August 4, 2020 at 11:00 am, the family encourages guests to dress for the weather. The Reverend Scott Obenchain will be officiating . In lieu of flowers, donations can be made to the Montgomery County Animal Shelter, or the Va. Tech School of Veterinary Science. Arrangements by McCoy Funeral Home, Blacksburg.