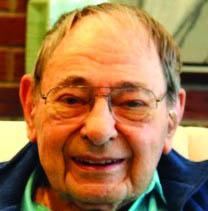 Vincent Chester Talley, age 94, of Dublin, Ohio, passed away on Tuesday, March 9, 2021. He was born in Coshocton, Ohio, on September 8, 1926, to the late Chester Brooks Talley and Alice Lydia Mercer Talley.

In World War II he served in the United States Navy on the Aleutian island of ATTU. He received his Bachelor of Science (Electrical Engineering) for Ohio University, Athens, and his MSE (Electrical Power Systems) from the University of Michigan, Ann Arbor. He worked for the General Electric Company for 34 years in various Electrical Power Systems capacities in Schenectady (NY), Philadelphia and at International General Electric (IGE) based in New York City.

Vincent was a registered Professional Engineer in the states of Ohio and Pennsylvania. He was a member of Tau Beta Pi (Engineering Honorary Society) and a Senior Member of IEEE (Power Engineering). He retired from General Electric in 1986. Finding a home in Virginia in 1989, Vincent and his wife, Phyllis, moved to Blacksburg. He was an Elder in the Blacksburg Presbyterian Church, audited geology courses at VA Tech, and pursued his lifelong love of astronomy with the Roanoke Valley Astronomical Society.

In addition to his parents, Vincent was preceded in death by his wife, Phyllis. He is survived by his children, Dr. Lynne Talley and Dr. Jeff Severinghaus, of Solana Beach, Calif., Chuck Talley, PE, and Nancy (Snyder) Talley of Westerville, Ohio; grandchildren, Brad and Kathleen (O’Brien) Talley, Katy (Talley) and Jason McCarthy, Max Henkart, Sarah Severinghaus and Alex Severinghaus; and four great-grandchildren, Declan and Kian McCarthy, and Evelyn and Lilly Talley.