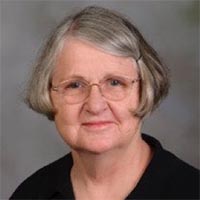 Mary Jane Hensley Talbot passed away quietly on Tuesday, March 27 at The Crossings in Blacksburg, VA.

Jane was born in Beloit, KS to George and Hazel Hensley. She married her high school sweetheart, Richard B. Talbot in 1953 and moved to Manhattan, KS where Richard was at university. Together, they lived in Manhattan, KS, Ames, IA, and Athens, GA before coming to Blacksburg in 1974 for Richard to found the Virginia-Maryland College of Veterinary Medicine at Virginia Tech.

Not long after Richard’s tragic death in 1994, Jane took a job with the Media Relations department at Virginia Tech as a photo librarian/archivist. She loved working there because it combined her gift of organizational skills with her strong creative nature. She retired at age 75 but continued being creative through her gardening, book club and especially her fiber arts. She was a Master Gardener, loved being involved with the Blacksburg Garden Tours, and an avid reader who volunteered at the Blacksburg library. She enjoyed her book club until attending became too difficult physically.

Jane is survived by her son, Lee, daughter-in-law Patti, grandsons Jamie (and wife Rachel) and Jon, great-grandchildren Jacob and Claire as well as her daughter, Andrea, son-in-law Bob, grandsons Adam and Stephen and granddaughter Jessi.

The family especially thanks the loving and attentive people at The Crossings and at the end, Amedisys Hospice, for the care and compassion shown to Jane.

There will be a private memorial service later in the Spring. In lieu of flowers the family suggests donations to the the Richard B Talbot Memorial Scholarship Fund at the Virginia-Maryland Regional College of Veterinary Medicine. Arrangements by McCoy Funeral Home, Blacksburg.