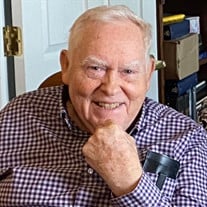 At an early age, Sonny chose to serve the Lord and remained true to that choice all his life. He was a draftsman for the Navy Dept. at David Taylor Model Basin his entire working career. His hobby was U.S. postage stamp collecting and he had a huge collection.

A funeral service will be held on Saturday, September 3, 2022, at 2:00 p.m. in the McCoy Funeral Home Chapel with Pastor Dennis Kinnan officiating. Interment will follow at Westview Cemetery, Blacksburg. The family will receive friends from 1-2 p.m. prior to the service at McCoy Funeral Home, Blacksburg.