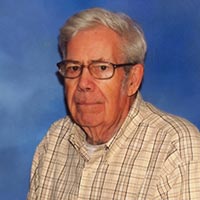 Joe was born on Capitol Hill on August 10, 1939, the son of the late Joseph V. Sr. and Irma Aline Williams Symanoskie. He felt honored and privileged to live and attend public school in the Nation’s Capital. Attending school on Capitol Hill for 9 years, he was active in Boy Scouts, Boys Club of America, and numerous school clubs. He completed High School at Bladensburg High School in Bladensburg, MD.

The family moved to Arlington, VA, and Joe completed a two-year program at George Mason Junior College. He was a member of the St. Agnes Catholic Church in Arlington, VA. Joe was a loyal and protective family member and enjoyed spending time with his family and participating in recreation activities on the Chesapeake Bay including fishing, crabbing, and boating, which he still enjoyed for many years afterward.

Joe had an insatiable interest in military history for both the Civil War and WWII. He collected and read volumes of historical literature throughout his life. Few historians could match his detailed knowledge of history of those era’s. He further enhanced his knowledge of history as a member of several Civil War re-enactment units for over 20 years. Their various encampments were conducted utilizing authentic field equipment. He frequently was joined by his brother, nephew, and family guests on reenactment events.

Joe served two years on active duty in a U.S. Army Engineer Battalion in Fort Hood, TX, and served two additional years in reserve duty in the DC area. He loved being a Soldier. For the following 6 decades, The 569 Engineering Co reunion group remained united in camaraderie and regular gatherings.

After his Army duty, he progressed through 31 years working for Bell Systems in northern Virginia. He began as a frame technician and advanced through installation, repairs, lineman, cable installation, and cable splicer, before retiring as fiber optic splicing splicer.

After retiring, Joe resided with his parents in their later years of declining health to assist in their care and well-being before moving to Hagerstown, MD, where he enjoyed the family activities of a number of his cousins growing families. Their children cherished his friendship, especially recognizing that he reveled at being a kid at heart.

He was a 30-year member of the American Legion including membership in the Arlington VA Post, Hagerstown, and later the Peterstown, WV, Post 145.

As a life member of The Knights of Columbus, he devoted extensive service working with various charitable projects. He also valued his brotherhood activities and especially loved the Arlington Counsel annual Christmas Caroling group performing for every Convent in the diocese. He remained in the K of C when in Hagerstown. He then became a member of the men’s group at Holy Family in Pearisburg.

Joseph was a truly gifted conversationalist and artistic in drawing others to participate. Through all his life venues, he earned a following of people who knew and respected him as a loyal friend. They know him as an honest, compassionate friend. What some did not know was the list of compassionate charities, such as missions and Native American charities, that he supported over the years. He was deeply empathetic about how the Native Americans were treated over history and several such charities were among those he supported.

Joseph moved to Lindside, WV, in 2010 to be near his sister, brother-in-law, brother, and cousins, whose families lived in the area including SW Virginia. He has been a valued resident in the kind and loving care of Country View Assisted Living for the last several years.

Those left to cherish Joseph’s memory include his brother, Francis “Frank” Symanoskie and wife Victoria of Blacksburg, VA; his sister, JoAnne Will and husband Michael of Lindside, WV; one nephew, Christopher Sim and wife Jeanne of Christiansburg, VA; and two great nieces.

Private burial will be held at the National Memorial Park in Falls Church, VA. Online guestbook can be signed or condolences may be sent to the family at www.broyles-shrewsbury.com. Arrangements by Broyles-Shrewsbury Funeral Home, Peterstown, WV.