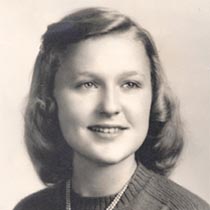 Mary Belle Kinney Swiger, beloved wife, mother, grandmother, great-grandmother and friend, went to be with the Lord on December 19, 2016. Mary was born on June 23, 1933, in Warnock, Kentucky.

She dearly loved and is survived by her husband of 63 years, Andy, their children, Michael (Suzy), Kurt, and Eliot (Lisa), her nine grandchildren, Adam, Joy, Andy, Daniel, Jessica, Meghan, Kristopher, Jacob and Jackson, and her five great-grand children. She is also survived by her brother, Jack Kinney. She is preceded in death by her parents, Cline and Ethel Martin Kinney, and her sister, Wanda Burwell.

Mary had a passion for the Civil War, traveling to many retreats and seminars, and gathered an extensive library, especially on Abraham Lincoln. Another interest was government and politics. She belonged to the League of Women Voters, serving as President of the Montgomery County League for many years.

Throughout her years in Blacksburg, Mary was active in the United Methodist Church. As we say goodbye to Mary, we think of her deep spirituality, flowers and music, family and friends, beauty and intelligence.

Mary’s life will be celebrated on Friday, December 23 at the Blacksburg United Methodist Church. A reception for friends and family will be held in the Wisman Room at noon with funeral services at 1:00 p.m. in the sanctuary. A private burial service for the family will be held immediately after at Westview Cemetery. Flowers may be sent to Blacksburg United Methodist Church. Arrangements by McCoy Funeral Home, Blacksburg.