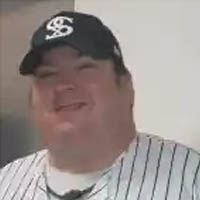 Known to his friends and colleagues as “Bus”, he was a big man, with a big personality and bigger heart. He was a self-proclaimed geek, possessing an encyclopedic knowledge of comic books, movies and Pokémon. He was devoted to his dogs, River and Luke. He was an avid Chicago White Sox and San Francisco 49ers fan and embodied their phrase, “Faithful Then. Faithful Now. Faithful Forever”. He had many passions and talents, his greatest being his ability to make everyone he loved feel loved as well. He was a son, a brother, an uncle, and a true friend. He will be missed.

Barnabas was preceded in death by his father, John. He is survived by his mother, Mary Beth; his brothers, Steven, John, and Mathias; sister-in-law, Tracy; his nieces and nephew, Ashley, Alyssa and Johnathan; and all of the lives he was a part of in this world.

Services will be held at St. Bernadette Catholic Church in Fuquay-Varina, NC on 11 August 2022 at 1100. In lieu of flowers, please consider donating to the Cameron Fitzwater Memorial Scholarship, established in memory of the child of his dear friends in Pulaski.
Donations can be sent to:
The Cameron Fitzwater Memorial Scholarship
132 4th St NW
Pulaski, VA 24301