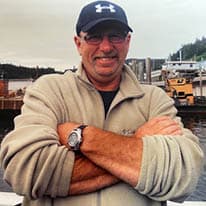 Lloyd attended Indian Valley Church of God. He loved the Lord and enjoyed telling people about his salvation. His will to recover after his accident and be with his family and friends was nothing short of amazing. His support system of family and friends was what kept him fighting every day. He never gave up.

Lloyd was a true character “one of a kind” with a big heart, plenty of humor and enough love to go around. He was a devoted husband, father, and grandpa. Lloyd never met a stranger. He loved to talk a lot, visit people, travel and most of all hunting was his passion.

The grandkids Wyatt, Reid and Raylinde were the light of his life. He would say it is better to ask for forgiveness instead of permission when it came to anything for those kids.

Some of Lloyd’s last words were: “He said to tell you both he talked to God today and Heaven is as pretty as they say.”

Funeral services will be held at 1:00 p.m. on Wednesday, January 5, 2022 at the Indian Valley Church of God with Rev. Kenneth Poston, Rev. Todd Debord, and Rev. Phillip Cox officiating. Interment will follow in the Captain George Quesenberry Cemetery. The family will receive friends from 11 a.m. until 1 p.m. at the church prior to the service.