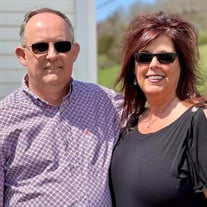 Ronnie Lee Stuart, age 56, of Christiansburg died, Tuesday, May 11, 2021. He was born in Pulaski, Va. on July 10, 1964. He was preceded in death by his father, Everett Randall Stuart and his grandparents, Lee and Clara Alley, Maurice and Florence Stuart.

Ronnie pastored and evangelized at many churches in the New River Valley.

Funeral services will be conducted Friday, May 14, 2021 at 11:00 am in the McCoy Funeral Home Chapel with the Rev. Clayton Kipps and Rev. Kenneth Alley officiating. Interment will follow in the Sunset Cemetery. The family will receive friends from 10-11:00 am Friday prior to the service at the McCoy Funeral Home, Blacksburg.