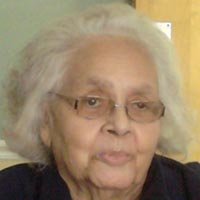 Mrs. Dorthy Mae Hairston Stuart, 87, of Floyd, Virginia, went home to be with the Lord on December 23, at 10:30 am. God graced us with this extraordinary daughter, wife and mother on October 4, 1927 to the late Phillip S. and Clessie H. Hairston. She is preceded in death by her husband, Ivan Ira Stuart, Sr. and her sons Ivan Ira Stuart, Jr. and Uycless Selwyn Stuart.

Dorthy was raised by a minister father and anointed mother who loved the Lord all of their lives. She joined Little River Missionary Baptist Church, and was a dedicated and faithful member and Deaconess for 60 years. She was also a faithful member of the Willing Workers Club until the end.

She was a very dedicated wife and mother and was known by many as the hardest working woman in Floyd County. There was absolutely nothing she wouldn’t do for the Lord and her family. During her marriage she helped to raise her younger siblings after her father suffered a debilitating injury, and cared for over 25 foster children from the Southwest Virginia area while they waited to return to their parents or to permanent homes also taking permanent custody of one and adopting the other.