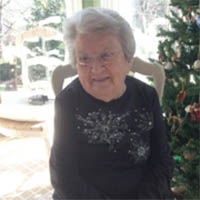 Wreathia Patton Strock, 94, completed her earthly journey to join Our Lord in her heavenly home on February 15, 2015. Wreathia was born in Crandon, VA March 6, 1920 one of ten children to the late William Miller and Poca Dallas Patton.

Wreathia worked numerous years at the Celanese Corporation in Narrows, VA. She was then able to extend her love of helping others through her later employment with Mountain Community Action Program from where she retired. Wreathia had an unfailing devotion to her family, friends, and faith. She was also known for her warm heart, enduring smile, and outgoing personality. Her untiring work ethic allowed her to enjoy gardening, crafting, cooking, traveling, and sharing her interesting stories with family and friends.

Family will receive friends, Friday, March 6, 2015 at 12:00 p.m. at the A. Vest & Sons Funeral Home, White Gate, VA where funeral service will be held at 1:00 p.m. with the Reverend Paul Looney and David Williams officiating. Interment will follow in the Mechanicsburg Cemetery.

In lieu of flowers, memorial contributions may be made to the Mechanicsburg Cemetery Fund in care of Lenora Chewning, 9011 East Blue Grass Trail Bland, VA 24315, a project dear to Wreathia’s heart.

McCoy Funeral Home, Blacksburg, VA is in charge of arrangements.