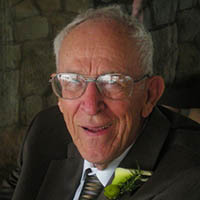 Born in 1924 into a loving German family living on a Wisconsin farm, Ed moved at the age of five to Dubuque and grew up near the river with his devoted parents, Alma (née Witt) and Ray Streeter. He married Mary L. (née West) Streeter in 1948; Mary preceded him in death in January 2004, after 55 wonderful years of marriage.

After graduating from Dubuque Senior High School where he excelled in football and basketball, Ed enlisted to join the war effort in 1942. Ed served in the U.S. Navy for over three years as a diesel mechanic on both a minesweeper and on the USS Blower submarine. He embarked on his initial tour of World War II duty down the East River of New York City, past the Statue of Liberty, and headed for the South Pacific.

Following the war, Ed attended Iowa State Teacher’s College (now Northern Iowa University) on the GI Bill, and then Drake University where he earned a master’s degree. Ed enjoyed a long career in educating youth with both academic and life lessons. He taught math and coached sports in Eldora, Humeston and Corydon, Iowa, eventually becoming superintendent of schools, and then, in Keokuk, became director of curriculum while continuing to coach the high school’s sports teams.

With a family of five young children in 1964, he and Mary moved north where he earned a PhD in curriculum and educational media at Michigan State University.

Ed next landed at Illinois State University in Normal, Ill., and stayed for 20 years, first as associate professor, then department chair, and last as dean of the College of Arts and Sciences.

He and Mary retired in 1988 to the Gulf Coast to explore a new world. They first lived in Pass Christian and then Diamondhead, Miss. In 2018, Ed moved to his son’s and daughter-in-law’s home in Cincinnati, followed by a last move this year to his daughter’s home in Christiansburg.

Ed enjoyed tent camping, small craft sailing and golf with his family and many friends. With Mary as skipper and Ed as crew, the two raced their Snipe sailboat on Illinois lakes and later aboard the “Easy Does It” on St. Louis Bay, Miss.

In retirement, with Mary, he scuba-dived the Great Barrier Reef off Australia and traveled through Europe and China, as well as across the U.S., visiting his children and many friends.

A memorial service for Ed Streeter will be held at a later date.

Messages to the Streeter family may be sent to Ed’s daughter, Pam Bontekoe, at pambon@gmail.com.

Donations in Ed Streeter’s memory may be made to The Boys and Girls Clubs of America (bgca.org) for either the Pass Christian, Miss., or Dubuque, Iowa, club locations, or to the “Sol Shulman Scholarship Fund” at ISU.