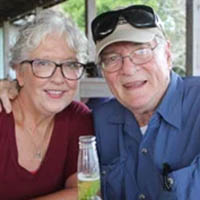 Charles Edward Straub, III, 79, of Christiansburg, passed away peacefully at his home on July 19, 2020. He was preceded in death by his parents, Charles and Betty Straub.

Charlie was born in Rocky Mount, NC on May 1, 1941. Growing up in Christiansburg, he attended Christiansburg High School. He furthered his studies at Virginia Military Institute (BA), the University of Richmond (MBA) and became a Certified Public Accountant. He was a faithful member of St. Thomas Episcopal Church of Christiansburg where he wore many “church hats” over the years.

Charlie fought a good fight, battling pulmonary fibrosis for the past year. The family would like to thank Carilion Hospice for their loving care during his last days.

A celebration of Charlie’s life will be held Sunday, August 2 at 6 p.m., in backyard of his home. The family will receive friends (in the backyard of the home) on Saturday, August 1 from 6-9 p.m.