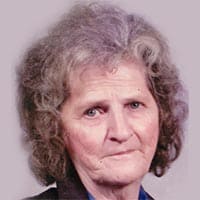 Dorothy Mae Stowers, age 82, of Christiansburg died, Thursday, June 13, 2019, at New River Valley Medical Center. She was born in Giles County, Va. on February 7, 1937 to the late Phlegar P. and Thelma Conley Wall. She is also preceded in death by her husband, Donald Lee Stowers, son, Bennie Stowers, one sister, and four brothers.

She is survived by her daughter, Debbie Stowers Roseberry who was also her caregiver, son, Ricky Stowers, four grandchildren, one great-grandchild, special sister, Jean (Roger) Ferguson, sisters, Bernese Bivens, Linda Mann, Louise Stowers, Mary Walker, brother and sister-in-law, Richard and Jeanette Wall whom she adored and were always there for her, special friends, Brenda Lester and George Joly.

Funeral services will be conducted Sunday, June 16, 2019 at 2:00 pm in the McCoy Funeral Home Chapel with the Evangelist Brian Ferguson and Rev. Josh Graham officiating. Interment will follow in the Boyd Cemetery. In lieu of flowers memorial contributions may be made to the family to help offset expenses. The family will receive friends from 1-2:00 pm Sunday prior to the service at the McCoy Funeral Home 150 Country Club Dr. SW, Blacksburg.