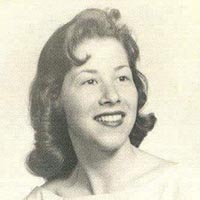 Patricia (Pat) Ellen Ratcliffe Stone, of Blacksburg, VA., formerly of Pearisburg, VA went to be with the Lord on Friday, March 2, 2018 at Carilion New River Valley Medical Center. Pat was born on June 20, 1940 in Bluff City, VA and was a daughter of the late, Lewis Gale Ratcliffe and Marguerite Elizabeth Atwell Ratcliffe. Besides her parents, she was preceded in death by her husband, John Paul Stone, Jr., brother, Lewis Douglas Ratcliffe, brother-in-law, Jack Corell, niece, Paula Robertson and several aunts, uncles and cousins.

Pat was a graduate of the Pearisburg High School Red Devils and the National Business College in Roanoke. She retired from VA Tech with over 20 years of service and she was a member of the First United Methodist Church in Pearisburg. She loved writing poetry and painting. Her whole life was centered around her love for her family and her friends.

A Celebration of Life will be held Thursday, March 8, 2018 at the Givens Funeral Chapel in Pearisburg at 2pm with the Rev. Brian Burch officiating with burial following in the Birchlawn Burial Park in Pearisburg. The family will receive friends at Givens Funeral Chapel one hour before the service. Online condolences can be sent to the family at givensfuneralhome.com.