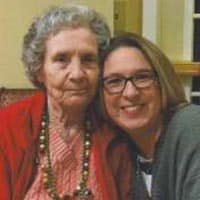 Shelby Jean Atkins Stiff, age 81, of Salem, VA formerly of Pembroke, VA died on April 25, 2019. A native of Giles County, VA, she graduated from Newport High School in 1955. She then went to work at Poly Scientific for several years before marrying her sweetheart, Buddy, and moving to Richmond. While in Richmond she worked for Lauris and Brothers Tobacco Company.

After moving back to Giles County, they built a house and started a family. Later Shelby worked in the cafeteria at Eastern Elementary School until retiring. She was a member of Lucas Memorial Christian Church for many years. Shelby loved her family and being with them. She also enjoyed gardening, being outside, listening to the birds, and walking with her sisters.

She is preceded in death by her husband, William “Buddy” Stiff and infant daughter, Christy Lynn Stiff, her parents, William “Keith” and Etta Atkins. She leaves to cherish her memory her daughter and husband, Wendy and Robert Schnitz of Blacksburg, VA, her granddaughters, Shilah Stiff and Abbigail Schnitz both of Blacksburg, VA, her sisters Shirley Whittaker of Pembroke, VA, Peggy Maxey (Harold) of Narrows, VA, Barbara Price of Blacksburg, VA, Virginia Ratcliff of Pembroke, VA, Doris Jackson (Eldie) of Peterstown, WV, Frances McCormick of Newport, VA, and, brother in law and his wife, Pete and Ann Stiff of Roanoke, VA and sister in law Carol Skarbeck of Roanoke, VA, as well as numerous nieces and nephews.

The service will be held at Kendall Funeral Home in Pembroke, VA on Monday, April 29, 2019 at 11:00amwith Reverend Eddie Kendall and Reverend Thomas McDearis officiating. Visitation with the family will be one hour prior to the service. Burial will be at Birchlawn Burial Park in Pearisburg, VA following the service.

The family would like to thank Brookdale Salem and Good Samaritan Hospice for all the love, care, and support Shelby received while she was there.Flowers are appreciated, but if you feel led donations can be made to the Alzheimer’s Association. “Let’s find a cure!” Online condolences may be sent by visiting kendallfuneralhome.com.