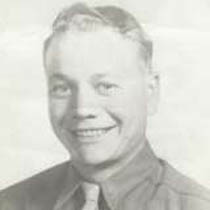 Henry Wiley Stevers, 90, of Pembroke departed this life Saturday morning, March 19, 2016, at Lewis Gale Montgomery Hospital in Blacksburg. Born in Pembroke on April 4, 1925, he was a son of the late John Dexter and Pricey Link Stevers.

He was retired from the National Gypsum Co. at Goldbond, was a U S Army veteran of WW II and attended the Kimballton United Methodist Church when he could. He was preceded in death by his parents, his sisters Kathleen Whittaker and Lois Eppling and his brothers Bill, Beuland (Blue Jay) , Donald, and Russell Lee Stevers.

Funeral services will be conducted Tuesday at 11:00 am in the Kendall Funeral Home, 605 Snidow St., Pembroke with burial following in the Fillinger Cemetery at Pembroke. The family will receive friends at the funeral home Monday evening from 6 until 8 pm. Graveside military honors will be conducted by local American Legion and VFW posts.

The Kendall Funeral Home in Pembroke is in charge of arrangements. Online condolences may be sent by visiting kendallfuneralhome.com. 540-626-7221.