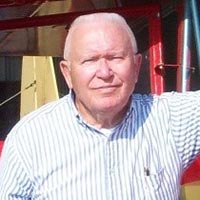 Richard Grayson Stevens, 84 of Pulaski, Virginia, passed away on Wednesday, November 4, 2020 after a brief illness. He was born on November 3, 1936 in Washington, DC and raised by his maternal grandparents, Mary Alberta Phillips and Walter Earl Phillips in Pulaski County, VA.

He attended Edwards Military Institute, Salemburg, NC, served one year in the United States Army, 82nd Airborne, and then graduated from Pulaski County High School. In Pulaski he took his first flight at Loving Field, Pulaski which started his lifelong love of aviation. He then served four years in the United States Air Force where he worked as an air traffic controller in Okinawa, Japan and accumulated flight hours to get his pilot’s license. After leaving the service, he worked at radio station WPUV and became an air traffic controller for the Federal Aviation Administration (FAA) in Norfolk and Leesburg, VA. His first pilot’s job was with East Coast Flying Service, a private charter operation where he flew DC3s. While he had offers from several major airlines, he chose to work for Piedmont Airlines, based in Winston-Salem, NC, and was hired on his daughter’s 5th birthday, June 30, 1966. Captain Stevens flew for Piedmont for 19 years, flying DC3s, Martin 404s, Fairchild F27s, YS-11s, and 737s, until grounded with his first heart attack. He was an active member and officer of the Piedmont Silver Eagles and the Quiet Birdmen, Roanoke Hanger.

Graveside services will be held at 2PM Monday Nov. 9th from the Dishon Cemetery, Snowville, VA. Funeral arrangements are being handled by Stevens Funeral home, Pulaski, VA. In lieu of flowers, memorial donations are requested for the upkeep of the Dishon Cemetery (Mrs. Belva Dalton, 3780 Lead Mine Rd., Hiwassee, VA 24327), the American Heart Association, or a charity of your choice.