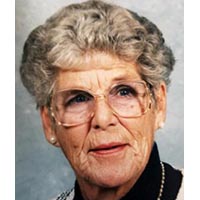 Surviving are her sons and daughters in law, Matt Stevens and Beverly Staples-Rivers, Skip Stevens and John and Ginger Stevens. Grandchildren, John Robert Stevens, Anna Stevens and Carey Stevens. Many nieces and nephews and special friends, Jack Byrd, Dean Wilson, Zetta Arnold, Pam Freeman and all her girls that took such loving care of Alice during the last years of her life.

The Family will receive friends at Stevens Funeral Home Wednesday the 17th from 10am till 1pm. A graveside service will be in Oakwood Cemetery at 2pm officiated by the Rev. Melissa McNair-King and Dr. Olin Whitener. In lieu of flowers Alice requested memorials be given to the Pulaski County Humane Society, P.O. Box 1046 Dublin, VA 24084.