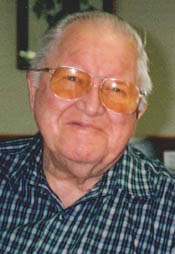 Donald Lafayette Stafford, 89, of Fairlawn, entered his new eternal home on Tuesday, July 8, 2014. He was born in Giles County, Virginia on March 18, 1925 to the late Frank and Nina Hetherington Stafford. He was preceded in death by his loving wife of 57 years, Lois Harless Stafford. He was also preceded in death by a brother, Maurice Stafford and a sister, Emma Ann Stafford Steele. He retired as an Instrument Mechanic at the Radford Army Ammunition Plant with over 35 years of service. He was a long-time and active member of Fairlawn United Methodist Church where he loved to sing in the choir and faithfully served in many other roles. He was proud to be a Master Mason for 63 years and was a member of both Eggleston Lodge #309 in Eggleston, VA and Henry Clay Lodge #280, in Dublin, VA. He had been a ham radio enthusiast for many years and enjoyed communicating with those in Army MARS and other ham radio operators. He was a die-hard fan of the Pulaski County Cougars football team and the Virginia Tech Hokies. If there are television sets in Heaven, we know he is watching reruns of The Andy Griffith Show and The Waltons. He enjoyed going to yard sales and bringing home assorted “treasures” and “bargains”. He had a true talent for fixing things and this was one of the many ways he loved to serve others. He was called upon by many people over the years for his repair skills – family, friends, neighbors, and the church – and he always responded to their needs. He was a devoted and loving husband, father, grandfather, brother, and uncle. Despite many health issues, he remained positive, never complained, kept his keen sense of humor, and was an inspiration to all who came to know him. He was blessed by the love and support of his family; his friends; his church family; Mary Ann Harris and special caregivers of Comfort Care Senior Homes in Blacksburg; and countless others. He is survived by daughter and son-in-law, Cynthia Stafford Counavelis and Tom Counavelis, of Raleigh, NC; son and daughter-in-law, Chris and Kim Stafford, of Fairlawn; grandson Nicholas Counavelis, of Raleigh, NC; sisters, Frances Stafford Bowling, of Roanoke and Charlotte Stafford Sartin, of Rich Creek; brother-in-law and sister-in-law, William (Bill) and Betty Harless, of Pearisburg; three sisters-in-law and brothers-in-law, Betty and James Roberts, of Pearisburg, Patsy and Bob Bruce, of Christiansburg, and Diane and Scotty Fewell, of Dublin; three sisters-in law, Charlotte Harless, of Williston, SC, Helen Harless, of Radford, and Patty Harless, of Pulaski; and many nieces, nephews, cousins, extended family, and dear friends.
Visitation will be held on Friday, July 11, 2014 from 10 AM until 12 Noon at the Fairlawn United Methodist Church. Funeral services will be held following the visitation at 12 Noon with Rev. Bobby Lorton officiating. Interment will follow at Sunrise Burial Park in Fairlawn.
In lieu of flowers, donations may be made to Fairlawn United Methodist Church, 7590 Brandon Road, Fairlawn, VA 24141.
The Stafford family is in the care of Mullins Funeral Home & Crematory in Radford. www.mullinsfuneralhome.com