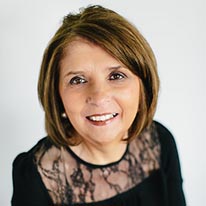 Barbara Stafford was the best kind of contradiction: She was tiny in stature but could move mountains with just a look of her deep brown eyes. She mowed her yard with pearls and lipstick. She kept an immaculate house but had drawers full of papers. She was a leader in her community with a quiet and faithful posture, rarely seen in today’s times. She never returned phone calls but had a treasure trove of deep, special friendships.

God broke the mold when he brought Barbara into this world to the late Howard Morris and Frances Morris (Ratcliffe) on May 7th, 1953 in Pearisburg, Virginia. She was raised with her two sisters, Rhonda and Linda, on Bunker Hill, where they lived a rich life despite having little money. She often recounted adventures of magical playhouses made from the coal shed, simple, exquisite dinners of dozens of ears of corn from the garden, and sharing a single pair of boots with a cousin during the snow. Barbara’s hardscrabble upbringing shaped her attitude towards life and work. She learned to face life’s difficulties with a quiet strength and dignity.

Barbara spent her entire life in the mountains of Giles County, except for short stints in Richmond, Virginia where she first went to business school at Smithdeal Massey after high school. She then returned to the mountains and began her lifelong calling as a mother when she had her miracle son, Christopher Mann. She often said that the two of them grew up together.

Barbara’s father pulled her into politics from a young age, dragging her to potlucks and rallies. She fell in love with the party –especially the people- and spent many years involved in everything from Republican women to municipal politics. In the course of her career she served faithfully as a member of the Virginia House of Delegates and then Mayor of her hometown of Pearisburg, Virginia.

It was in this world of small town politics that Barbara connected with Jeff Stafford and the two started a quiet and quirky romance. They were married in 1981 and soon began to add to their family. They welcomed Elizabeth Painter Stafford into the world and soon thereafter added Mary Pendleton Stafford (Zirkle). Barbara loved to recount how she managed two girls, fifteen months apart, with very little help from her busy husband. She felt an enormous sense of deserved pride in her motherhood and as the de facto leader of the family. She was the best Mother any child could have asked for; she spared no expense for her children and was known to even iron their underwear.

In 1990 Barbara found herself a young widow with three children. She rose to the occasion, filling Jeff’s seat in the Virginia House of Delegates and facing life’s challenges head-on with a beauty that was unmatched. Barbara’s mother, Frances, father, Howard –and the larger Pearisburg community- rallied with her to raise her children. Her house, located in the middle of town, was so open to welcome friends and neighbors that she didn’t even own a house key. People knew they were always welcome to drop in unannounced. One would often find three or four people a night swing through to drop off something for a civic event she was running, a Girl Scout project, or just a friend wanting to talk or catch up. She was literally and figuratively the center of the town.

Barbara served selflessly as a Girl Scout Troop Leader, Sunday School Teacher, Dance mom extraordinaire, Chess mom, Mayor, Town Council Member, GOP Activist, Chamber of Commerce Director, and so much more. In 2011 Barbara was overjoyed to begin working with Congressman Morgan Griffith as a Constituent Services Representative. She held the position until her last day on earth and took great pride in both helping the people of the 9th District as well as listening to that day’s political gossip.

It didn’t seem fair when she was diagnosed with cancer in late 2019 but she faced it with her trademark quiet strength and a happy heart. Her final years were spent fighting to live and making new, wonderful memories with family, while remaining a faithful friend and employee to so many. Barbara could come across as a no-nonsense woman but she had the capacity to give and receive love that reached far and wide.

She had a special bond with her sisters Rhonda (Reynolds), Linda (Candelieri), and Heather (Frazier). Often, people would mistake Rhonda and Barbara for the same person, despite the fact that Rhonda being blond (not natural) and Barbara being brunette (also, no longer natural). They seemed to be the same person at times, and perhaps shared the same heart. She had a special soul friend in Betsy (Davis) Beamer her cheerleader, confidante, and “fixer” until her dying minute.

In a world that can be so difficult to parent, Barbara managed to raise three children who adored her completely. Her son called her constantly while walking the dogs and she looked forward to hearing about his work and daughter, Mallory. Her daughter, Elizabeth called daily but Barbara also served as an alarm clock for Elizabeth, calling her every morning to wake her up. Barbara talked with her youngest, Mary daily as well listening to her latest adventures in cleaning or parenting.

Barbara had a quiet and strong faith, kneeling faithfully every night to pray to her God. If she woke up in the middle of the night, she would get back down on her knees and pray again. We know she is in the presence of the Good Shepherd and experiencing the fullness of His joy.

She wasn’t a cuddly, warm mother but she always exuded unconditional love. The fact that each of her children called her daily –often twice a day- just to talk, speaks volumes to the love and gratitude they felt for her presence in their lives. She loved her Daughter-in-Law Jennifer Mann, who she thought could clean almost as well as she could. She adored her Son-in-Law Wade Zirkle and relished drinking Manhattans with him by a warm fire. In her final year, she had the joy and gift of the company of her neighbor and fellow former Delegate, Joseph Yost. He was a true gentleman angel to her; often crushing her meds or cleaning her house. Joseph deeply enriched Barbara’s final year of life.

When Barbara was ready to leave a dinner or party, she would simply get up and go. True to the end we were not ready for her to leave this earth but her body was tired and she needed rest. She died surrounded by her sisters, children and Betsy holding on to her and whispering “I love you” thousands of times that day. It is unclear how we will live without her.

For a woman who stood so small, she has left an enormous hole in the hearts of many. She leaves behind so many special friends; The list is too long for this page. She was carried through this life with her own strength but also the strength of so many. She died knowing she was loved.

She is survived by her children, Christopher Mann and Jennifer Mann of Morehead City, NC; Elizabeth Stafford of Baltimore;. Wade and Mary Zirkle of Denver; Her Granddaughters, Mallory Stafford Mann and Frances Pendleton Zirkle. She leaves her dear sisters and their families as well. She deeply loved her nieces and nephews.

The family would like to thank Carillion Memorial in Roanoke for their excellent care of Barbara in her final days, the Duke Cancer Center (especially Scott Balderson for his care and love for Barbara), and all her special friends who tried so hard to fatten her up and help her gain strength. She was so grateful for each friend, even if her picky appetite didn’t show it.

Memorial Donations may be made to Pearisburg First United Methodist Church.

A Celebration of Life will be held Saturday June 19th at 2PM at the Pearisburg First United Methodist Church with Rev. Brian Burch and the Rev. Dr. Fred L. Austin officiating. Family will receive friends Friday evening, June 18th from 6-8 PM at Pearisburg FUMC. Online condolences can be sent to the family at givensfuneralhome.com.