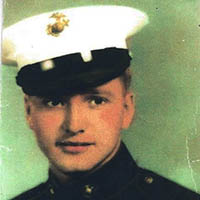 It is with broken hearts that we announce the passing of our beloved Bill. He went to be with the Lord at Carilion Giles Community Hospital on Saturday, August 29, 2020.

Bill was born in Narrows, VA, on October 4, 1928 to the late Jesse James Stables and Rosa Leah Turner Stables. Besides his parents, he was preceded in death by three brothers, Jim, John and Bob Stables and two sisters, Gladys Blankenship and Margaret Stables.

He graduated from Narrows High School in 1946 and enlisted in the U.S. Marine Corps, serving his country for five years. He served in Korea and was a Chosin Reservoir survivor. Upon returning home, Bill entered law enforcement, first as a Deputy Sheriff, a Narrows town police officer, then retiring as a special investigator for the Giles County Sheriff’s Office. He attended the First Baptist Church in Rich Creek as long as he was able.

Funeral services will be conducted Tuesday, September 1, 2020 at 1pm at the Givens – Riffe Funeral Chapel in Narrows with Lay-Minister Tommy Gordon officiating with burial following in Fairview Cemetery in Narrows. The family will receive friends at the funeral home Monday evening from 6 – 8 pm. The family is being served by Givens-Riffe Funeral Service in Narrows, (540) 726-2442, and online at riffefuneralservice.com.