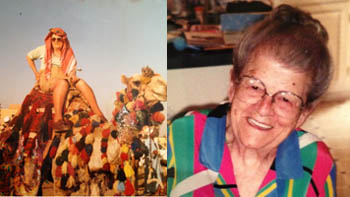 Beatrice Lawson Spivey died in Radford, Virginia on September 27, 2013. She was born at noon on May 22, 1915, the eighth child of eleven born to Robert F. Lawson and Catherine Jennings Lawson. She attended a rural elementary school thru fifth grade, dropping out for the lack of school books. She was self-educated through constant reading, including reading the King James Bible through many, many times.

In November, 1935 she married John H. Spivey. They farmed and Mr. Spivey worked in Austinsville mines. Mrs. Spivey particularly enjoyed growing flowers and was known for the beautiful gladiolus and sunflowers in her garden. They grew huge gardens and shared the vegetables and apples from their orchards with friends and neighbors. She loved to can and freeze vegetables and to experiment with new recipes and techniques. She always dried lots of apples for the winter, first on a metal roof and later with an electric dehydrator. Her fried apple pies were so special that no one could quite duplicate them.

She taught her three children to read and write long before they started school. She was very proud of this and later said, “I gave them a head start,” and she and her husband encouraged their children to do well in school and to continue their education by going to college and becoming lifelong readers. She also enjoyed reading to her grandchildren and was very close to her great-grandchildren.

After the death of her husband in 1989, Mrs. Spivey moved to Galax, Virginia, where she discovered new opportunities such as water aerobics. For over 25 years she was an active member of the senior citizens group and served as an officer of that organization. She was active in her church, devoted to her friends and relatives, visiting shut-ins regularly, taking them gifts of food and flowers. She moved to Radford about eleven years ago to be near her daughter Jo Alderman and her grandchildren and great-grandchildren.

Mrs. Spivey loved to travel. In 1985 she took a trip to Egypt and Israel. With her deep knowledge of the Bible, the trip to Israel was especially significant. She also took other opportunities to travel, going to Canada 3 times, Minnesota, Texas, and Alabama multiple times, Disney World in Florida, California, Alaska, Hawaii and many other states as well as some cruises. A few months before her 91st birthday she flew alone to visit her daughter in Texas where she enjoyed picking grapefruit and walking on the beach. She was an adventurous traveler, took a helicopter ride in Alaska, a hot air balloon ride in Minnesota and a camel ride at the pyramids in Egypt.

Besides her husband, Mrs. Spivey was pre-deceased by her parents, 5 sisters and 3 brothers. A sister, Eskie and husband Roy Ayers of Winston-Salem, NC and a brother, Gilbert Lawson of Hillsville, Va survive, as well as sister-in-law Pearl Spivey Quesenberry, Austinsville, Va.

She is survived by 3 children: Lois and Husband Paul Hruska of Rochester, Minnesota, Jo (Joyce) Alderman of Radford, and V. Ray and wife Pamelia Spivey of Birmingham, Alabama; 3 grandchildren: Robert N. and wife Sandy Alderman of Lynchburg, Katrina and Husband Dirk Compton of Draper, and Natasha and Husband Bobby Kozel of Stuarts Draft; 4 great-grandchildren: Cade and Conner Compton of Draper and Landen and Katie Kozel of Stuarts Draft.

A memorial service will be held at a later date. The Spivey family is in the care of Mullins Funeral Home & Crematory in Radford. www.mullinsfuneralhome.com