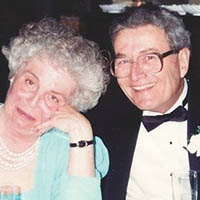 Blair graduated from Robert E Lee high school in 1946. He then went on to college at the University of Virginia followed by medical school at UVA and was a member of Phi Beta Kappa National Honorary Fraternity. After medical school, he enlisted in the Army and was honorably discharged as a Major in the Medical Corp. He then decided to lay roots in Radford, a community he loved while practicing as a pediatrician for 30 years. Blair had a strong passion for the outdoors including gardening, birds, stargazing and canoeing. He also was involved in the community by volunteering in many activities.

He was preceded in death by his parents, Jim and Lelia Spillman; wife, Betty Spillman; and son, James Todd Spillman.

The family would like to thank Intrepid home health and hospice who helped with Blair and greatly touched our lives. Also, thanks to the many caregivers who made it possible for him to stay home which was his wish.

A private graveside service will be held at Thornrose Cemetery in Staunton, Va. at a later date.

For those wishing to make a memorial donation, please consider Radford Public Library.

The Spillman family is in care of Mullins Funeral Home & Crematory in Radford, Virginia. www.mullinsfuneralhom.com