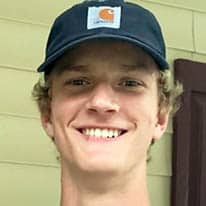 Jackson Field Spencer was born on June 21, 2002, and God called him home on Valentine’s Day, February 14, 2022, at 3:16 pm. He was a son, brother, grandson, friend and most importantly a Christian that had accepted Jesus Christ as his personal Savior. He was not perfect, but was a sinner saved by Grace.

Jackson was a 2021 graduate of Ballard Christian School as their Valedictorian and he was the recipient of the Eagle Award that recognizes excellence in character, dedication to his studies, and a love for the Lord. He attended Zion’s Hill Baptist Church and was the Quizmaster for the Undefeated Youth Program at Ballard Baptist Church on Wednesday nights. He was an avid sports fan and enjoyed weightlifting.

Jackson prayed that God would help him to hate laziness and was a hard worker up to the time of his death. He was attending a Mercer County CTC Adult Education Program to further his education. He wanted to learn as many trades as he could so as he jokingly told others he could become the “fix it” man for Ballard Christian School.

Jackson decided to transfer to the Ballard Christian School (BCS) at the beginning of his Junior year. BCS was started by his Great Grandfather, Pastor Howard Spencer, in 1976. While attending BCS, he was involved in various activities and was a leader. He loved BCS and especially Pastor Dave Spencer the Principal. During his time there, a building program for new classrooms and a chapel was started. He volunteered to work on the construction with a goal of having it completed before he graduated in 2021. His dream was not realized, and it was not ready until after he graduated but he continued to volunteer and was there several times a week spending time at a place he loved.

In Jackson’s death, he was able to give the gift of life to others as an organ donor.

Jackson is the son of Jim and Becky Spencer, and a brother to Casey Spencer, Howie Spencer and Ellie Spencer all of Bluefield, Va. He is the grandson of Howard and Nila Spencer of Glen Lyn, VA and Joe and Dotty Fields of Peterstown, WV. He is a nephew to Rob and Tina Edgar, and cousins Hannah and Seth Edgar of Hurricane, WV. He is a great nephew to Patty Spencer, Joyce Faris, Joe Spencer (Becky), Dan Spencer (Kathy), Tom Spencer (Rhonda), Bill Spencer (JoAnn), Tim Spencer (Melodie), Sam Spencer (Belinda), Dave Spencer (Teresa), Becky Prunesti (Lou), Richard “Dick” Jackson, Brenda Miller (Leonard), and Dave Fields (Jeanette). Jackson has numerous family members and friends, all of whom love him dearly.

He was preceded in death by a great aunt Mary Ellen Spencer and Great Uncles Tim Fields, O.L. Faris, and Johnny Spencer.

A celebration of Jackson’s life and legacy will be held at Ballard Christian School on Saturday, February 19, 2022. Visitation will be from 11:00PM to 1:00PM, with services led by Pastor Joe Spencer, Pastor Rick Stacy, Evangelist Tim Spencer, and Pastor Dave Spencer to follow. He will be buried in the Spencer Family Cemetery located beside the Ballard Christian School.

Online guestbook can be singed or condolences may be sent to the family at www.broyles-shrewsbury.com. Arrangements by Broyles-Shrewsbury Funeral Home, Peterstown, WV.