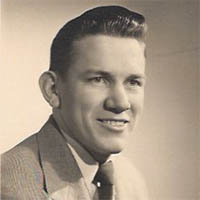 Donald Spencer, 86, of Dublin, went peacefully to be with his Lord on Tuesday, November 20, 2018. He lived in Cleveland, Tennessee until age 17 when he enlisted in the United States Army, serving mostly in France. Soon after returning to the states, he began his career with Southern Railway (later Norfolk Southern), retiring in 1987. Not wanting to be idle, he worked as a licensed real estate agent in Georgia until his second retirement in 1993.

Don loved and served his Lord in several Christian churches, most recently at McCoy Community Christian Church where he sang in the choir while able. He also loved jogging, playing basketball, softball, Trivial Pursuit, and cheering on the Tennessee Volunteers.

Don was preceded in death by his daughter, Kimberly Spencer, his parents, Richard and Bessie Spencer, brothers, Richard, Paul, Jack, Claude, Fred and David Spencer, and the mother of his children, Joyce Spencer.

A Homegoing Celebration will be held Monday, November 26, 2018 at 11:00 am at Community Christian Church, McCoy with Steve Lay and Jeff Spencer officiating. Interment will follow in the family cemetery. Prior to the service, the family will welcome friends from 9:00 am until service time. In lieu of flowers, memorial contributions may be made to Blue Ridge Christian Camp, P.O. Box 428, McCoy, Va. 24111. Arrangements by McCoy Funeral Home, Blacksburg.