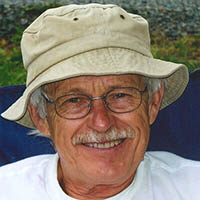 Although Ray insisted that he had written his own obituary that simply stated, “Ray died” (insert Ray’s cackling laughter here), we have taken the liberty to add a bit more (Sorry, Papa!).

Raymond Earl Spaulding of Radford, Virginia, passed away at home on Wednesday, September 16, at the age of 80, with the Radford contingent of his family by his side. Ray was born in Abilene, Texas, and moved with his family to Greensboro, North Carolina, where he graduated from high school in 1958, but he was also an honorary Mainer, where he spent his summers on his grandparents’ farm.

Ray attended Wheaton College but after two years transferred to Guilford, where he found more like-minded liberals and discovered the New Yorker, which he read faithfully for the rest of his life. Upon graduation in 1958, he got a job in Dundalk, Maryland, teaching mathematics, and there he met his wife, Jackie Davis, whom he married on June 20, 1964. After completing a master’s degree at the University of Illinois, Ray accepted a teaching position at what was then Radford College. In 1971 he completed a Ed.D in Math Education at the University of Maryland, and returned to Radford University where he taught until retiring on January 1, 2003.

After retirement, Ray spent the next seventeen years pursuing his many loves. He was an avid cyclist, poke boater, reader, music lover, bridge and tennis player, NOVA watcher, sports enthusiast, and mathematical problem solver. His many hobbies have resulted in his leaving of hundreds of CDs; more videos than blockbuster; geometric models he constructed of wood, paper, plastic and straws; a collection of bikes; stereo photographs, both antique and original; and an entire library of books, many on “recreational math” (if you are interested in reading about recreational math, feel free to contact us).

Although a man of many loves, his absolute joy was spending time with his family, especially in the summer on the deck with a bushel of steamed crabs and his latest CD on the stereo. He leaves behind his wife of 56 years, Jackie; a daughter and son-in-law, Jennifer and Don Lawrence of Radford, and their children, Eli and recent bride Zoey of Hagerstown, MD, and Max; and his son and daughter-in-law, Noah and Dora Flores Spaulding, and their children Raymond Jacobo “RJ” and Marie Isabella, who are currently residing in Islamabad, Pakistan. He also leaves behind his sibling and her husband, Ruth and Tony, of Kennebunk, Maine, and countless other friends and relatives who wish they could spend one more day at Bethany Beach sitting under the reading tent with him. A memorial service will be held in his honor under the reading tent next summer.

Ray will be missed by all who knew him. Everyone who remembers Ray is asked to celebrate in their own way. Raising a glass of IPA in his memory would be quite appropriate. Please do not send flowers. Donations to the Virginia Tech chapter of Students Helping Honduras in Ray’s memory would also be appreciated.

The Spaulding family is in the care of Mullins Funeral Home & Crematory. www.mullinsfuneralhome.com