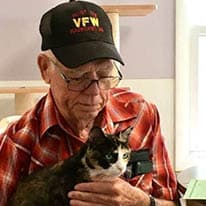 He was a U.S. veteran having served in the United States Navy during the Vietnam War period. Following his commitment to the Navy, he embarked upon a very rewarding, and proud career in the Merchant Marines. He was married 48 years to his lovely wife Mary, and during that time he found a passion for collecting and restoring Volkswagon Buses and Beatles, and this enthusiasm carried beyond the death of his wife in 2018. The absence of Mary became to-great of a challenge at his Dublin home, so he sold his home and moved to the Falls Mills area where his family roots began.

In addition to his parents and his wife, he was preceded in death by two brothers: Robert W. Wiles, and Thomas Wiles: sisters; Barbara Hemlick, Laura Dye, Elizabeth Sparks, and Carol Harrold.

He is survived by two sisters: Margaret Smith of Folkston, GA, and Stella Jane Walker of Grandin, FL. He was also survived by many nieces and nephews.

Graveside funeral services will be held Thursday, February 24, 2022 at 2:00 p.m. at the Southwest Virginia Veterans Cemetery, with the Rev. Charles Damron officiating. The family will receive friends at Seagle Funeral Home from 12 Noon Thursday until 1:30 p.m., afterwards a funeral procession will take them to the cemetery for the graveside service where military honors will be provided. In lieu of flowers, please make a donation in his memory to the charity of your choice.

Online condolences may be sent to the family by visiting www.seaglefunearlhome.com Arrangements by Seagle Funeral Home, Pulaski. 540-980-1700