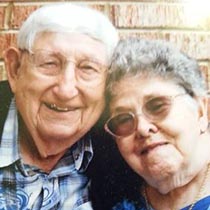 Irvin Lewis Sowers, 92, of Floyd, Va. went to be with his heavenly Father on Friday, March 17, 2017, at his home surrounded by family.

He was the son of Lewis and Iowa Sowers. He was preceded in death by two grandchildren, Charlotte Troutt and Dale Browning; as well as nine siblings.

He served in World War II as a soldier in the 7th Armored Infantry Battalion. He was a brick mason for over 30 years.

A funeral service will be held at 11 a.m. Monday, March 20, 2017, at Gardner Funeral Home, with Pastor Leon Wood and Pastor James Bradley officiating. Interment to follow in the Jacksonville Cemetery with graveside military rites by VFW Post #7854 and American Legion Post #127. Family will receive friends on Sunday, March 19, 2017 from 4 to 6 p.m. at Gardner Funeral Home. Online condolences may be made at www.gardnerfuneralhomefloyd.com, or on Facebook @gardnerfuneralhomefloyd.