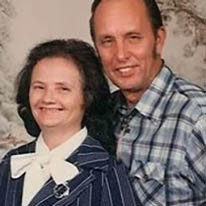 Doris Wickham Sowers, 76, of Radford, passed away on Sunday July 29, 2007.  She was preceded in death by her parents, James Edward and Thelma Gilmore Wickham, Sr.; and two brothers, James Edward Wickham, Jr. and Ray Wickham.

She was a retired Laboratory Technician a Radford Army Ammunition Plant. She was a faithful member of Calvary Baptist Church in Radford. She was a loving wife, mother, and grandmother who will be greatly missed.

Funeral services will be held at 11 a.m. on Wednesday, August 1, 2007 at Calvary Baptist Church in Radford with Pastor O.D. Morgan officiating. Interment will follow in West View Cemetery in Radford. The family will receive friends on Tuesday, July 31, 2007 from 6 to 8 p.m. at Mullins Funeral Home.

The Sowers family is in the care of Mullins Funeral Home in Radford. www.mullinsfuneralhome.com