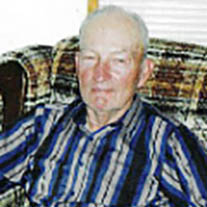 He served in the United States Army during the Korean conflict. A.J. was widely known in the community as “Captain” during his many years as a welder. His true passion was his family, friends, and farming.

The family will receive friends at Maberry Funeral Home on Friday, July 24, 2009, from 6 to 8 p.m. In lieu of flowers, donations may be made to the Carilion Hospice of the New River Valley or to the National Parkinson Foundation. Special thanks to Carilion Hospice of the New River Valley, as well as everyone for the many acts of kindness and outpouring of support during his long illness.