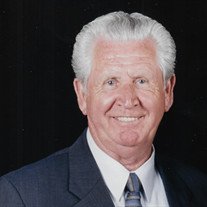 Leo Kenneth Southern, age 88 of Christiansburg went home to be with his Lord and Savior on Thursday, January 28, 2021.

Leo served in the Army and was honorably discharged from the Korean Conflict. He was a 50 plus year member of Faith Missionary Baptist Church, where he served for many years as a deacon, and Sunday school superintendent

In 1969 he and his wife established Southern Printing Company, Inc., in Blacksburg. The business is still in operation, serving the printing needs of the surrounding area.

Funeral services will be held on Thursday, February 4, at 11:00 AM at Faith Missionary Baptist Church, with the Reverend Mike Vest, and Reverend Kenneth Wells officiating. Visitation will be held one hour prior to the service. Interment will follow at Sunset Cemetery.
Social distancing and the Governor’s mandates will be observed. Face coverings are required.

The family is being served by McCoy Funeral Home, Blacksburg. In lieu of flowers, the family requests that donations be made to Good Samaritan Hospice Inc.