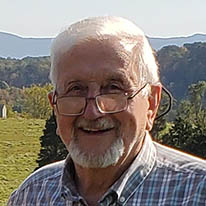 Fieldon Ray Southern, 88, of Bedford, passed away on June 19, 2022, due to complications from Vascular Dementia. He was born in Pulaski Co. on December 6, 1933, to the late Everett Jordan Southern and Zelma Jennings Southern. In addition to his parents, he was preceded in death by his brothers, Forest Southern, Calvin Southern, and Walter “Poochie” Southern and sister, Iris S. Rasnake.

Ray had a special love for dogs, especially his current one Maverick. He loved the outdoors and walking through the woods with his dog. He also liked to whittle and would spend hours making walking sticks.

He is survived by his wife, Jan A. Jabin Southern. His children from his first marriage, Diane Southern, Lisa DuBose and Suzanne Holston; four grandchildren; brother, Ronald Southern; sister, Doris Dawson and numerous nieces and nephews.