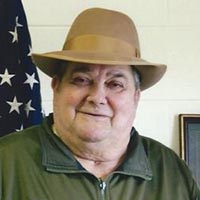 Elwood Songer Sr., 84, of Pearisburg and formerly of Narrows, departed this life Wednesday evening, June 17, 2015, at Carilion Giles Community Hospital in Pearisburg. Born in Narrows December 21, 1930, he was a son of the late Cobert Lee and Della Clark Songer.

Elwood had been employed as a carpenter’s helper and expressed his faith in his Savior attending The Church Of God Of Prophecy and Pathway To Heaven Church. He was preceded in death by his parents; his beloved wife, Margaret Josephine Butler Songer; his brothers, Woodrow and Clifford Songer; and his sister, Dolly Mae Songer Long.

Funeral services will be conducted 1 p.m. Saturday, June 20, 2015, in the Kendall Funeral Home, 605 Snidow St., Pembroke, with burial following in Fairview Cemetery at Narrows. The family will receive friends at the funeral home one hour before the services. Online condolences may be sent by visiting kendallfuneralhome.com.