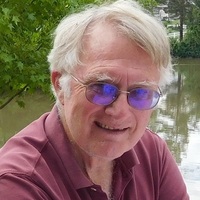 Robert Leonard Snider was born in Asheboro, North Carolina, on October 17, 1946, to Howard William Snider and Josephine Plagg Snider. He was raised in Denton, North Carolina, where his father’s family had lived for generations. Robert passed away at Roanoke Memorial Hospital on March 22, 2021.

In 1974, Robert took a permanent position with the mathematics department at Virginia Tech, where he was hired as an associate professor with tenure. Within a few years he was promoted to the rank of full professor. In 1977 he was invited to take a yearlong sabbatical at the Hebrew University in Jerusalem where he worked with world class mathematicians and proved an important theorem in his area. In 1981 he was invited to take another yearlong sabbatical, this time at Cambridge University in England. He really enjoyed the opportunities provided by both of these sabbaticals. Robert retired from Virginia Tech in 2010 and was awarded emeritus status by the university.

Robert had many interests through his life. He enjoyed bird watching from an early age as well as fishing, hunting, gardening and horticulture. He enjoyed researching grafting on fruit trees and cross-pollination of plants. He was always interested in finding old varieties of apple trees throughout the area.

To remember Robert, please consider a donation to NPR, PBS, or the Cornell Lab of Ornithology.

The Snider family is in the care of Mullins Funeral Home in Radford. www.mullinsfuneralhome.com