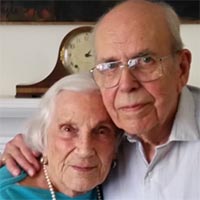 Elizabeth Duncan Snell, 92, of Lynchburg, Va., passed peacefully on July 4, 2018, in the presence of her loving children.

Elizabeth was born on June 1, 1926, in Scottsville (Buckingham County, Va.), daughter of Robert Franklin (Frank) Duncan and Tressie Coleman Duncan. Elizabeth was preceded in death by her parents; her husband, Richard L. Snell; and her sisters, Myrtle Duncan Columbus, Doris Duncan Moseley, and Shirley Duncan Hobbs. She is survived by her four children: Robert Terrell Snell and his wife, Jo Anne, of Forest, Va.; Paul Duncan Snell and his wife, Pat, of Westerly, Rhode Island; Katherine Snell Lynde and her husband, Stuart, of Blacksburg, Va.; Nancy Snell Meacham and her husband, Vernon, also of Blacksburg; and ten grandchildren, eight great-grandchildren, and two great-great-grandchildren. She is also survived by her youngest sister, Phyllis Duncan Thomasson.

Elizabeth was a devoted wife to Richard, whom she married on August 4, 1945, and greatly missed every day since his death on July 18, 2017. We take comfort in knowing they are together again. She spent the past year living in Blacksburg to be near her daughters, a time all three highly valued. Elizabeth was beautiful, compassionate, and admired by all who met her.

A memorial service is being planned for August 4th in Lynchburg. In lieu of flowers, donations may be made to a charity of your choice. Arrangements by McCoy Funeral Home, Blacksburg.