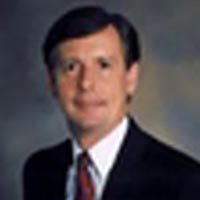 He was a devoted family member and his survivors include his wife of 41 years, Becky of Blacksburg, daughter and son-in-law, Erin and Jeff Naiman and grandson, Ryan; mother and step-father, Nelva and Calvin Gardner of Floyd; two step-brothers, Tommy Gardner of Floyd and Gerry Gardner of Fishersville; special aunt and Uncle Betty and Bob Hower of Lewes, Delaware, father-in-law, John West of Roanoke, and many cousins and in-laws.

Clyde worked for four banks during his long career and was currently employed as a commercial loan officer with Carter Bank and Trust in Christiansburg, VA. He leaves behind a myriad of current and past customers who appreciated his cordial, personality and strong work ethic.

Clyde was a member of the Blacksburg Rotary Club, where he served on various committees and positions. Clyde had many interests, especially sports. He was a loyal Hokie fan and enjoyed attending all athletic events, but especially football and basketball.

Clyde was a faithful member of the Blacksburg United Methodist Church, where he served as an usher captain. He also coached and played on the church softball league in both the summer and Fall seasons.

A visitation will be held Friday evening from 5:00 to 7:00 at Gardner Funeral Home in Floyd, Virginia. The funeral will be Saturday at 2:00 at Blacksburg United Methodist Church with Pastor Joe Carson officiating. An interment will follow at Jacksonville Cemetery in Floyd, Virginia.

In lieu of flowers, donations can be made to either Blacksburg United Methodist Church or the American Stroke Association.

Online condolences can be made at gardnerfuneralhomefloyd.com.. Arrangements are being handled by Gardner Funeral Home , Floyd, VA., (540) 745-2007.