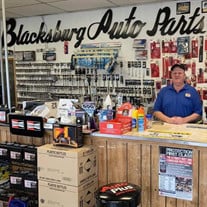 He owned and operated Blacksburg Auto Parts, his family business, which was been in Blacksburg for over 60 years. As well as Auto Experts, which he operated for over 15 years. Sid enjoyed farming, trout fishing, deep sea fishing, apple butter making, gardening, and ham and sausage making. He was also an avid race car fan. Especially of Rusty Wallace.

A funeral service will be held on Tuesday, August 30, 2022, at 11:00 a.m. in the McCoy Funeral Home Chapel with Pastor Scott Obenchain and Rev. Kevin Albert officiating. Interment will follow at Centennial Christian Church cemetery. The family will receive friends from 5-8 p.m. on Monday, August 29, 2022 at McCoy Funeral Home, Blacksburg. An additional Celebration of Life will be held on Saturday, October 8, 2022, at 2:00 p.m. at Sid’s home. In lieu of flowers, memorial contributions may be made to Montgomery County Animal Care and Control, 480 Cinnabar Road, Christiansburg, VA 24073.