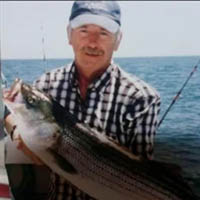 Thomas William (Tom) Smith, age 67, of Christiansburg died, Tuesday, September 15, 2020, at his home. He was born in Blacksburg, Va. on July 16, 1953 to the late Walter Kyle and Hattie McDaniel Smith. He was also preceded in death by one sister, Barbara Huffman, two brothers, Andy Smith and C.F. (Monk) Smith.

A celebration of life will be held at a later date. Arrangements by McCoy Funeral Home, Blacksburg.