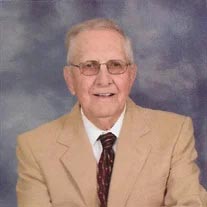 Stanley Lewis Smith, Sr., 91, of McCoy, went to his heavenly home Monday, May 18, 2020 at Lewis Gale Hospital-Montgomery. He was born in Montgomery County, VA on July 20, 1928 to the late Irvin and Ruby Queen Smith. He was also preceded in death by his wife, Faye Dowdy Smith; his son-in-law, Billy Tuck; granddaughter, Stephanie Tuck; sister, Emma, and brothers, Sherman and Lawrence.

Stanley was a veteran of the Korean Conflict from 1950-1952 having served in Germany with the 527MP Company (Military Police), the 709 MP Battalion and the 4th MP Company in Frankfurt. He attended V.P.I. and RPI which is now VCU. He spent his career as a Traveling Sales Representative.

Graveside services will be held Friday, May 22, 2020 at 11:00 am at Centennial Christian Church Cemetery, McCoy with Rev. Gary McCoy and Rev. Shake Smith officiating. Arrangements by McCoy Funeral Home, Blacksburg.