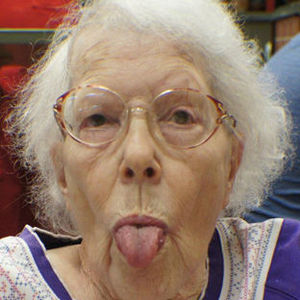 It took Him 100 years, but on July 27, 2016 the Lord decided that He was finally ready to bring Norma Earle Mount Smith home to join her family. We are sure it took Him this long to prepare Heaven for the five Mount sisters to be together again. He knew she was the instigator of all of their shenanigans on earth, so He left her until He could get the angels ready for her arrival.

She was born in Norman, Oklahoma and was the seventh child (and fifth girl) born to Timothy S. and Martha Alcinda Van Meter Mount. Being the youngest, she had the rest of the family wrapped around her finger – and everyone knew it. From being the only child in the family to be born in a hospital, to beginning to read at the age of three, Norma stood out all of her life. She was definitely a woman who knew her own mind and would tell you exactly what she felt. While there are many terms that could be used to describe her (obstreperous, intelligent, cantankerous, argumentative, clever, funny, to name a few), the best term was loving. If she stuck her tongue out at you, you knew you were loved, because only her favorites were treated to this special gesture.

Norma lived a long and eventful life. She was a child of the depression era and the frugality of that time period was present her entire life. Together with the love of her life, James E. “Smitty” Smith, she frequented garage sales long before it was popular. Finding a sad piece of furniture, she and Smitty would breathe new life into it, and often gave the restored pieces to family and friends. The love of garage sales was passed to their children and grandchildren – so much so that the grandchildren would fight over who got to spend Friday night at Nonnie and Boppaw’s so that they could go to garage sales with them. Winners always went home with some treasure they had found on their outings.

Norma loved classical music, poetry and art. The walls of her home were filled with art works of all types. She had original Native American art work, etchings, as well as the beautiful paintings by her sister Grace McIntosh. She was determined that her children would enjoy all types of artistic endeavors and would print poems on the end of the kitchen counter; both kids were required to commit them to memory. Her stereo was often on high as she played Beethoven, Mendelsohn, Haydn, or some other master. However, she also enjoyed Bing Crosby, Tony Bennett, and Neil Diamond.

Norma’s love for Jesus Christ was evident for all to see. A lifelong member of Southern Baptist churches, she had a faith that was unshakeable. However, her humor was not far behind her faith, as she was always on the lookout for the ‘Second’ Baptist Church. Eventually, her grandson found one and sent her a picture of the sign.

Norma was a true patriot and voted for the first time in the Presidential Election of 1936. She loved to share her views on politics – and would argue with you until you saw the light! Had she been able, she would have loved to have shared her views on the current presidential election – whether you wanted to hear them or not. She raised her children to have great respect for the United States of America and for those who fought for the freedoms they enjoyed. Her love of country was passed on to her son, who became a member of the US Army; her daughter, who worked for the Department of Defense Dependent Schools in five different countries; as well as two of her grandsons, one who retired after 25 years as a Major in the US Army, and the other as a part of the Coast Guard Auxiliary.

Norma held only a handful of jobs, including working as an inspector for Douglas Aircraft Company during World War II, and worked on the US Census in 1960. This led her to a career in market research, eventually owning her own market research company, Smith Interviewing Service for over 25 years, after which she retired to live the life of garage sales, gardening, and traveling.

Norma and her husband were members of the International Friendship Force and made trips to Australia, New Zealand, Germany, the Netherlands, England, and Brazil. They also visited their daughter in South Korea.

Norma moved to Narrows, VA in January 2012 and came to love living in the Virginia Mountains. She was close to family and loved to have her grandkids and great grandkids come to visit. Since she no longer did much traveling her kids and grandkids kept her in the loop by sending her postcards.

For two years Norma and Sandy (her daughter) hosted foreign exchange students. YeEun was from South Korea and Nisanart (Am) was from Thailand. She learned much about the cultures found in these countries and enjoyed having these girls in her home.

Being “an Okie born, an Okie bred, and now an Okie dead,” Norma will be buried next to her husband in Oklahoma City, OK. The family would love to have you drop by Sandy’s house at 719 Piney Mountain Road, Narrows for a visit on August 10, 2016 from 6:00 pm to 8:00 pm to Celebrate the Life of this remarkable woman. In lieu of flowers, donations to the American Cancer Society would be appreciated.

The family is being served by Riffe’s Funeral Service in Narrows, (540) 726-2442 and online at www.riffefuneralservice.com.