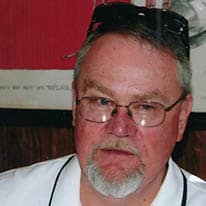 Randolph “Randy” Fravil Smith, Jr., age 75 of Pulaski, died Thursday, March 17, 2022 at his home, surrounded by his family. He was born on August 19, 1946 in Pulaski, and was the son of the late Virginia Cynthia Roseberry Smith and the late Randolph Fravil Smith, Sr.

After high school, he married Connie Lawson, and their marriage was a loving example and inspiration to their children. Later in 1991, Randy went to Virginia Tech and obtained a Bachelor of Education degree. His love for Virginia Tech and Virginia Tech sports, never ceased. Upon graduation from Virginia Tech, his employment, as Paralegal, with Allen Groseclose, Attorney At Law, divinely came together in a flash. He remained with Allen until Allen retired and closed his office, shortly before Allen’s death.

My father was no ordinary man. I got to be “his favorite little girl”. I got to dance on his feet. I got to race up the hill and watch him win every time. I am so thankful for the special time I had with him. TRACI

Not only did I call my dad, “My Dad”, but I also called him my best friend. I was truly blessed to have him as a strong role model and guiding light in my life. His sense of humor and stories will be forever missed. I love you, Fravil! JAMES RANDOLPH

The family would like to give thanks to the nurses at the infusion center, Carilion Hospice, and home health.

Randy’s family warmly celebrated his life privately, several days ago. There will be no public memorial service.

Online condolences may be sent to www.seaglefuneralhome.com Arrangements by Seagle Funeral Home, Pulaski. 540-980-1700