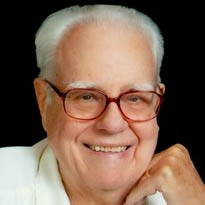 Horace was born in Asheville North Carolina, on July 12, 1933, to Horace William Smith Sr., and Georgia DeBruhl Smith. He graduated from Asheville High School then attended North Carolina State where he graduated with a degree in Chemical Engineering. He then started his career with Hercules, Inc. in Radford, Virginia, eventually working in aerospace engineering and project management.

In Radford, he was a member of the First Baptist Church where he met his wife-to-be, Carolyn Boone, from Wirtz, Virginia, who was then attending Radford College. Horace entered the Army Reserve in 1957 and after basic training remained on reserve for eight years.

Horace and Carolyn were married at the First Baptist Church of Radford on August 10, 1957, where Horace later served a term as deacon. They lived in Radford for over 20 years, where all their children were born and raised. Horace also served on the Radford School Board as chairman. He was active in Toastmasters and served as a scout leader in both the Cub and Boy Scouts. Horace and Carolyn lived for a time in Bountiful, Utah, where both worked for and retired from Hercules, Inc.

After spending some time in both Nashville, Tennessee, and on Smith Mountain Lake in Virginia, Horace lived for the last 25 years in Aurora, Colorado where both he and Carolyn were members of the Mississippi Avenue Baptist Church. Over the years, Horace enjoyed reading, hunting, gardening, cooking, woodworking, travel, but most of all, fishing. He also spent time in charity work and many years in service to the recovery community.