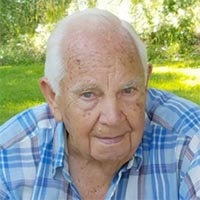 Harvey Mason Smith, Jr., age 93, known as H.M. or Shorty of Blacksburg, passed away on Wednesday, March 25, 2020 at Roanoke Memorial Hospital. He was born in Montgomery County, VA on December 12, 1926. He lived all of his life in the Tom’s Creek and Glade Road area in or near Blacksburg.

H.M. was preceded in death in 2008 by his wife of 58 years, Mary Agnes Smith. He died on the date of their 70th anniversary. He was also preceded in death by his parents, Harvey Mason Smith, Sr. and Lucy Ann Smith; sisters, Viola Hamlin, Phoebe Hamlin, Katherine Hutchison; brother, William Smith.

He is survived by his daughter, Marsha Caldwell and husband, Philip of Pulaski; sons, Larry, Randy, David; special granddaughter, Amanda Caldwell, all of Blacksburg; special friends, The Entire Caldwell Family of Riner, Teresa and Sydney Farley of Fairlawn, Dana Caldwell and family of Craig’s Creek; as well as many nieces, nephews, and friends from many churches and communities in the area.

H.M. attended Fairview Community Church on Glade Road, Blacksburg for most of his life and elementary school in the same building. He, along with other church members and community residents were largely responsible for the major remodeling of the church interior and maintenance of the grounds. He enjoyed being part of church and community events; the Coal Miners and Veterans Memorial Associations.

H.M. retired from the Mechanical Engineering Department at Virginia Tech in 1991 with more than 39 years of service. He was a man skilled in many crafts including as a mechanic, machinist, welder, in sheet metal, electrical and carpentry work.

In addition to caring for his own wife, children and grandchild, H.M. was a faithful caretaker for his parents, sisters and aunts and assisted his wife caring for her family members.

H.M. Smith, Jr. was a role model to many for his unwavering dedication in his long life to his family, church, friends and community. He will be greatly missed.

The family would like to express their sincere appreciation to the people at the local doctors officers, home health care, hospitals and rehab facilities in Blacksburg, Radford, Salem and Roanoke who cared for H.M. over the last months of his life. Also, many thanks to all of the pastors, church, family and friends who prayed for him and helped in many ways.